Louis I. Kahn Park was built on the site of the Greystone Luxury Hotel (formerly known as the Gladstone Hotel), demolished in 1971.  The original park was a low-maintenance space with few plantings and an emphasis on concrete; hence its nickname, “Concrete Park.”  It was later dedicated to the memory of the Philadelphia architect, Louis I. Kahn, who, with his wife Esther, had lived nearby on Clinton Street.

Tired of the barren landscape and poor condition of the park, a group of neighbors formed The Friends of Louis I. Kahn Park in 1983.  The Friends sought to improve the setting by creating a greener, more inviting design for Kahn Park.

For more than 15 years, until her death in 1996, Esther Kahn was active in fundraising and assisting with the annual antique and craft fair, and the summer concerts.  At the dedication of the fountain, she remarked on Lou’s preference for water in or near his sites.

Kahn Park, now lush with plantings, is one of the few green oases between Washington and Rittenhouse Squares, the commercial heart of the city.  For its size – less than an acre – the park is one of the most intensively used public spaces in Philadelphia.

The Philadelphia Parks and Recreation Department provides Kahn Park with electricity and water.  Funding for operating expenses comes from neighborhood residents, businesses, and other friends of the park.  Volunteers work throughout the year to plant, clean and maintain the gardens and underlying park infrastructure.

Use payment buttons for donations to the general fund. Click on "Donations" in menu above to make endowment fund donations.

Charming city park located in the Washington Square West neighborhood of Philadelphia, PA. Managed and funded by the Friends of Kahn Park and our generous donors. 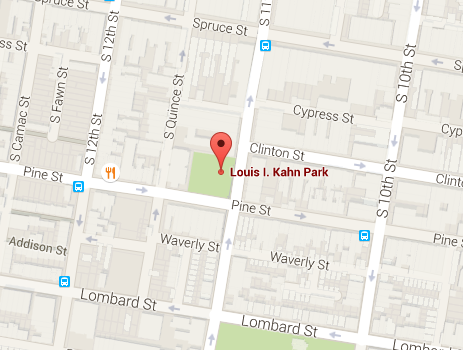